The OAS Platform is capable of running in Docker containers on both Windows and Linux, with only a slight variation in configuration. In this article we will walk through the necessary steps for basic containerization, but using these principles you can build your own images and configure them for your particular needs. 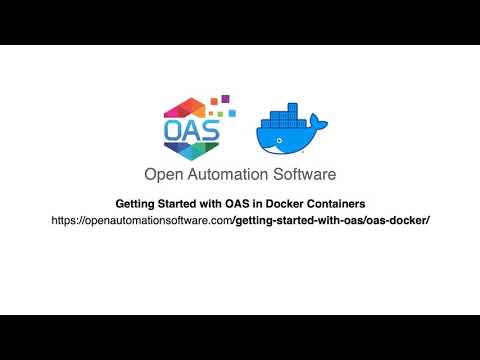 The OAS Platform was designed to be a high performance IoT Gateway, Data Logging engine, data visualization server, and more. To benefit from these features, whether the server is running as a stand alone or in a container, be sure to consider the following:

All Docker versions of the OAS Platform are available on Docker Hub and can be pulled into your local machine with a single command. This makes installation and upgrading extremely convenient. You can browse all OAS images at hub.docker.com/u/oasiot. Once you have chosen the image you would like to use, matching the OS/architecture (e.g. Linux/x64 or Windows/AMD64) execute the pull command, which is provided on the page for each image. For example, the pull command for Linux/x64 is:

This will download the latest version of the image. So, if OAS releases a new version, simply re-run the pull command and you can always be up-to-date. If you would like to pull a specific version, you can use the version tag in the pull command. For example, pulling version 15.00.042 would use:

Using a version tag in your workflow will allow you to keep your installations uniform and predictable.

To run an instance of this image in a container, execute the following command. This will spin up an instance and display the console output in the terminal window. The container can be stopped by hitting CTRL-C. By default, the docker runtime will provide a randomized unique name for the container.

To allow the Docker engine to assign random port mapping, you can use the following command. After doing this, just inspect the running container to see which ports have been assigned:

Optional: Creating your own Image

Before any application can be run as a Docker container, it has to be bundled in an image. The process of creating an image involves the creation of a Dockerfile with configuration options, and calling docker build against the file. Whether the target platform for running the container is Linux or Windows, the process is the same, with some slight variations on the contents of the Dockerfile. For more information on Dockerfiles and their syntax, see the online documentation.

To containerize the OAS Platform we will take the following steps:

As you see, the Windows Dockerfile differs from the Linux version. The FROM entry references the nanoserver tag which is a bare bones Windows runtime host. The same ports are mapped in the EXPOSE lines. The COPY command copies the contents of the oas-win directory to the container’s oas directory. You’ll note the addition of the USER command, which specifies that the context the OAS Platform should run on is the System account with elevated privileges. This is required. Lastly, the ENTRYPOINT is modified to call the OASEngine.exe executable. Also, see the section below titled Windows Containers as you may run wither Linux or Windows applications in containers on the Windows platform.

Options for running a container

If you run a Docker container with the previous command, the Docker runtime will assign a random name for that instance. You can provide a custom name for the container to more easily identify the container. This must be a unique name on the server since no two containers can have the same name. This example runs the container, giving it the name “oas_production”:

In some cases, you may want several running OAS container instances to share the same configuration files so that when they spin up, they pick up the same settings. To do this, we’ll follow these steps:

A stand-alone installation of the OAS Platform is licensed directly my using the OAS Configuration application. You select Configure > License, select the machine (typically localhost if working on the current machine) and are presented with a unique License Code for the machine. This is sent to OAS and you will then be provided an encoded License Key that will activate the features you have purchased.

Running the OAS Platform in containers, licensing is handled slightly differently. On the container host machine, you install and run the License Host application, which communicates with all running containers to activate product features, and recognizes new containers as they spin up. When purchasing a license from OAS, you will select product features to enable along with a number of tags, and if deploying OAS within containers, you also select the maximum number of containers you will be running on the host.

On a Linux system, the installation and execution of the License Host is similar to installing the OAS Platform itself. From the product downloads page, locate the License Host for Linux and download the ZIP archive. Unzip this file and move the contents to your preferred location, then execute the following command on the Linux server to make the application executable:

You can now run the LicenseHost application directly with the ./LicenseHost command, or configure it to be started with the system when it boots up. You can follow the directions for setting up an application as a daemon on Linux from Step 3 of our online documentation, replacing the name and path of the OASEngine with that of the LicenseHost, where applicable.

Managing Licenses with the License Host

After starting the License Host on the container host server, you can connect to it from the OAS Configuration Application to apply or modify a license for that server. Select Configure > Container License from the main dropdown menu and enter the IPAddress of the host server.

Note that the LicenseHost will communicate on port 58729 so the host machine must allow TCP communications on that port so adjust your firewall rules accordingly. If you choose to change this port, locate the appsettings.json file in the distribution of the LicenseHost application and change the port number within it. You can also use this file to secure the License Host by adding a username/password combination.

Configuring the license on the container host is identical to configuring a license on a stand alone installation of the OAS Platform. Your License Code is used to acquire a License Key from OAS Support, and the key contains information about the product features to enable along with the maximum number of containers it will support.

Once your containerized OAS installation is running, you can connect to the individual containers with the OAS Configuration application and inspect Tags or any other feature. You will need to connect using the container’s assigned IP address, found by inspecting the Host Docker service. If you have not mapped the custom ports to the defaults of 58725 and 58727, you can use these directly with the containers’ IPAddress. If you have mapped ports, you can use the host’s IP address (or localhost on the host itself) with the custom ports.

Assuming you are running Docker Desktop on Windows, you first need to make sure to switch to “Windows Containers”. By default, Docker Desktop assumes you will be using Linux containers with Hyper-V. To make the switch, you can go to the Docker Desktop tool and select “Switch to Windows containers…”

Alternatively, you can use the following Windows PowerShell script to switch:

NOTE: Switching to Windows containers requires a minimum of Windows 10 Pro or Windows Server. Windows Home is not supported.