IoT Edge computing sets the stage for running anything anywhere, and with OAS this allows you to move data from anywhere to anywhere. This is ultimately the most flexible distribution or deployment platform. OAS brings even more to the party with the Store-And-Forward feature, ensuring zero data loss upon disruptions in connectivity. This feature is also available in custom drivers developed with the Universal Driver Interface (UDI), truly making it possible to connect OAS to ANY data source.

“Life is a traveling to the edge of knowledge, then a leap taken.”
– D.H. Lawrence

So what is Edge Computing? See this previous article that covers the basics and describes the differences between Cloud Computing and Edge Computing. OAS is a true Edge Computing platform as it allows you to deploy instances of the OAS server close to the source of your data, and connecting it to other instances of OAS services on both local and wide area networks. With OAS you can even share or aggregate your data with OAS instances on the internet. How you choose to deploy OAS is up to you and your requirements.

By deploying an instance of OAS next to your data source, you can perform data logging, data transformations and calculations at the source, thereby distributing the load of the entire system and allowing each component to continue working in the face of network interruptions.

In a typical cloud based system, a controller will communicate and push data up to a cloud system for easy connectivity. However, there is a big flaw in this design as you don’t know if the control is communicating with the cloud unless safeguards like watch dogs and confirmations of delivery are written into the code. In these circumstances, data can be lost because the data is not resident at the source.

Benefits of Edge Computing over Cloud Computing include:

One of the key features of the OAS Platform is Store-and-Forward, which caches captured data at the data source and transmits it to other systems when network communications resume. Typically, cloud computing solutions cannot do this. If a system is dependent upon cloud storage and processing, data is lost when communications are interrupted.

Store-and-forward enables your solution to self-heal and your data remains intact. If the database engine or data source to data logging isn’t available, that data is buffered locally and written onto a hard disk. 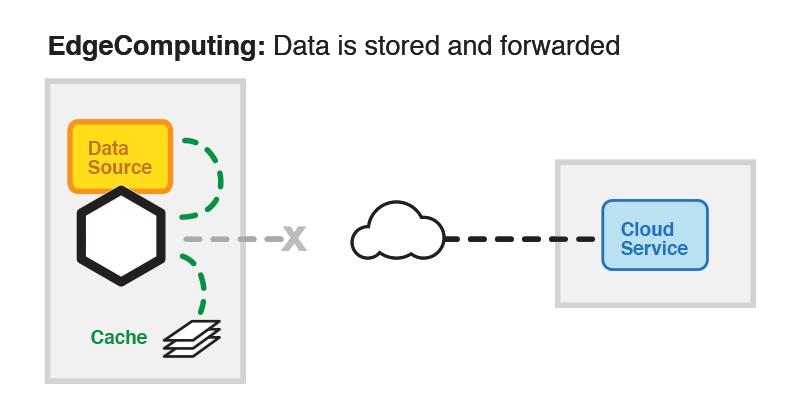 UDI with Store and Forward

The OAS Universal Driver Interface is a natural extension of the OAS operating philosophy – moving data from anywhere to anywhere. The UDI allows developers to create custom communication drivers for ANY data source, whether it be a proprietary database, 3rd party API, previously unsupported devices, file systems, or literally anything that can generate data. The UDI architecture also allows you to deploy a driver on any system, including Windows, Mac, Linux and even Raspberry Pi devices without requiring a full OAS Platform installation at the data source. And the UDI fully supports the Store-and-Forward capabilities of OAS.

This means you can create a simple driver that behaves just like a built-in OAS device driver with all of the Edge Computing benefits built in!